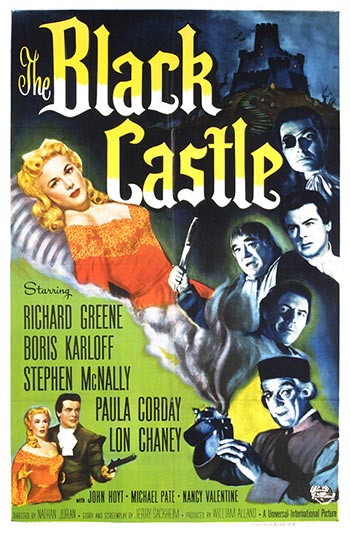 This is a prime example of uninhibited filmmaking at its best. Richard Greene (who does good in the role) search for his two missing friends takes him to the Black Forest domain and castle of one-eyed Count Bruno (Stephen McNally), a past enemy of his whom he has never seen face to face. Incredible film has so many awesome elements combined (for once) into a single film–a crocodile pit; a hulking mute (played by Lon Chaney, Jr.); a crafty doctor (played by Boris Karloff); a leopard hunt (VERY well done and VERY atmospheric); a love story; a castle; a swordfight; a sadistic, one-eyed count and his two evil accomplices (played by John Hoyt and Michael Pate!!!); an intriguing background story which makes the film even more interesting; and more!. Jerry Sackheim’s script doesn’t allow itself to be bound in–making a film that comes extremely recommendable to anyone who is into unlimited filmmaking with a touch of horror and atmosphere to it.