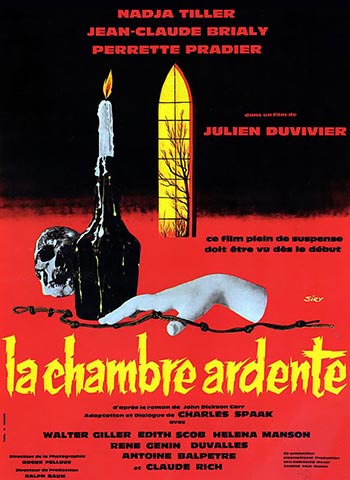 A group of people visit a weird old man who is a student of the black arts. The man lives in an ancient, cursed castle. Soon people in the group start being killed off.

The plot ingeniously combines two prolific subgenres in the horror film lexicon, “the old dark house” and “the witch’s curse”, dealing as it does with a 17th Century witch being deceived by her lover – a policeman dressed as a monk! – thereby unleashing a vengeful curse on his ancestors which decrees that every subsequent head of the family dies a violent death. This event is not depicted in the film but merely referred to throughout and we immediately jump into the present with a female ancestor of the witch […] being invited with her novelist husband to a chateau in the country which, as it happens, is owned by the ancestors of the witch’s duplicitous lover. The latter are a despicable bunch of amoral opportunists with the two young heirs greedily awaiting the demise of their cantankerous 75-year old uncle which could occur at any moment. One night, every member of the household (including his nurse) desert the old man for their own egotistical purposes and novelist and his wife volunteer to stay home and watch over him themselves…