The Curse Of Her Flesh (1968) Michael Findlay 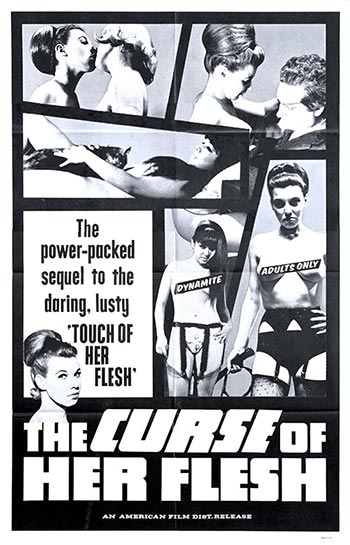 A man catches his wife, a stripper, cheating on him with another man. He runs away only to be hit by a car, resulting in his losing an eye and becoming paralyzed. He decides to take his revenge by hunting down and killing strippers. He poses as the owner of a strip club inorder to get close to his quarry.

“The Touch of Her Flesh” was pretty grimy, but its sequel manages to outdo it in every field. Its more depraved, more politically incorrect and offensive, more hilarious for the truly sick at heart, and considerably better made this time around (the slightly higher budget allows them to use actual synchronized sound, opposed to post dubbing). And while the plot is far from complex, at least there is a semblance of a story this time around. In other words, fans of vintage Grindhouse goodness will fall in love with this socially irredeemable piece of trash. However, both serious art buffs and especially feminists will quake in fear at it.

The Findley’s “Flesh” trilogy is standard sexploitation from the time in some aspects, but its much more extreme and intriguing than many of its contemporaries. The bizarre sexual dialog is always hilarious despite the rampant misogyny thats bound to turn off some. My advice, don’t take this trash too seriously (I’m pretty sure the producers didn’t either). Also, its rather well shot, featuring some nice, Noir and expressionist style camera work. Plus, the murders are all very original. All in all, “The Curse of Her Flesh” is yet another trash classic in the trilogy.