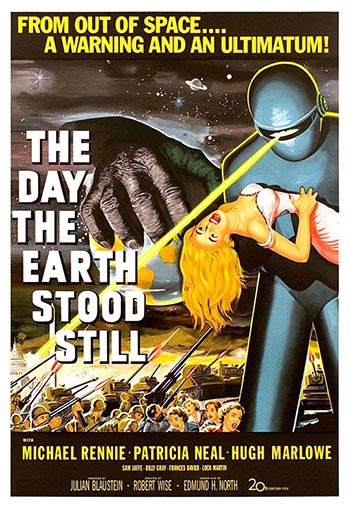 An alien (Klaatu) with his mighty robot (Gort) land their spacecraft on Cold War-era Earth just after the end of World War II. They bring an important message to the planet that Klaatu wishes to tell to representatives of all nations. However, communication turns out to be difficult, so, after learning something about the natives, Klaatu decides on an alternative approach.

Before there was ‘Star Wars’ there was ‘The Day The Earth Stood Still’. It brought together all that later sci-fi movies strive for. A solid story, believable characters and, for the day, great special FX. It was an examination of society at the time and the racial prejudice that permeated all levels of life. It studies mans fear of the unknown and the violent reaction it produces even today, and how the love of one person can change the course of events for the better.