The Decline of Western Civilization Part II: The Metal Years (1988) 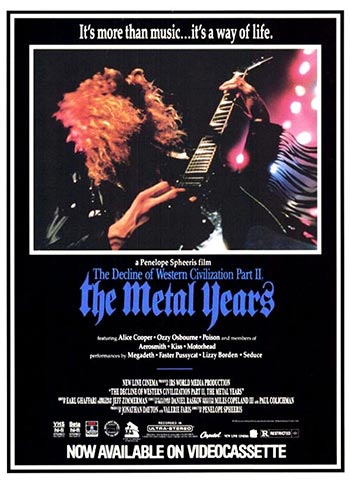 Documentary showcase, what life was like for the music artists living during the Los Angeles Heavy Metal scene in the mid and late 1980s.

A rock documentary ranging from interviews with seen-it-all veterans such as Ozzy Osbourne, Gene Simmons, Steven Tyler, to the up-and-comers of the era such as Faster Pussycat, Poison, and London. A revealing and fascinating chronicle on the 1980s scene of excess.

In retrospect, the film is actually funny in spots. Newbies such as London, Odin, and Seduce were quoted as saying “I will make it as a rock star” when asked what will happen if they don’t make it. “We WILL make it.” Amusing that they disappeared forever just months after this movie (and those statements) was made.

The Decline of Western Civilization Part II: The Metal Years (1988)