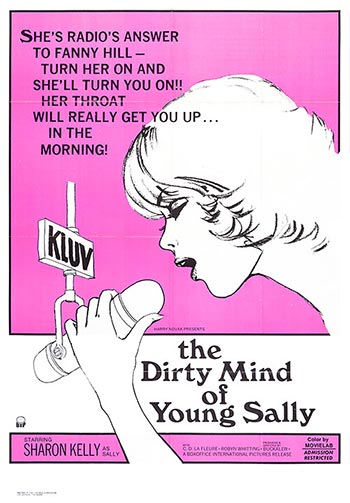 Sally runs a mobile “pirate” radio station–which she operates from her van–where, in her sexy and sultry voice, she encourages her listeners (mostly teenagers) to use the music she plays “to ball by”. She also takes calls from her listeners and even offers herself as a prize in a contest. Her show is so popular it winds up “turning on” large numbers of the local population. The authorities, of course, can’t allow that to happen, so they send out the cops to find her and shut her down.

One of a kind, irresistible soft core (not that soft either) staring Sharon Kelly, from time when young girls had naturally large firm breasts. Sharon is a travelling radio artiste who, despite being chased all over by the cops, manages to broadcast three shows a day. These consist of her talking dirty whilst playing with herself, or her engineer, or even a competition winner. Young teens then gather around to listen in and perform along with her, on the beach, at their club or in the back of their car. Essentially therefore the ‘plot’ allows for multiple activity and minimal dialogue. Just as well because although Sharon is excellent, those around her range from average to unbelievably poor. It matters not, however, because it’s her , her activities and those she inspires that’s the thing. The individual acts are all slightly overlong but they are so well done that it’s a little churlish to complain. Everybody seems to be enjoying themselves, everything looks good, the music is bearable and that evocative mix of furtive fumbling and Woodstock style freedom will always seem good to those of a certain age!