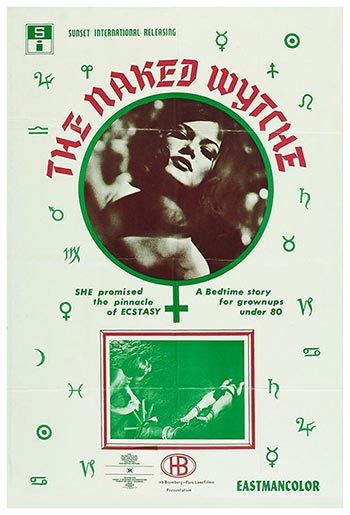 The Grimm Bros. tale of the brother and sister who wander into a witches’ house, but told with a more adult slant (in other words, lots of nudity).

Poor young Hansel (DAGOBERT WALTER) is increasingly frustrated by the reluctance of his girlfriend, Gretel (FRANCY FAIR) to give in to his desires. He takes her on a country picnic where he unsuccessfully tries to weaken her resistance by lavishing her with such compliments as “You’re about the best cook I’ve ever met!” and “A girl built like you is missing out on a lot of fun!” Yep, he’s a real charmer alright.

When a fallen tree mysteriously blocks the road on their way home, they are approached by the beautiful, sexually liberated Countess Helga, who generously invites them to spend some time at her country mansion (replete with bright orange sofa and groovy purple and red plastic lamp shades).

What follows is a weekend of wicked mind (and body) games, as Countess Helga puts Hansel through the sexual wringer. (Hansel may be good-looking, but he desperately needs a shower. In one scene, he walks around with massive sweat stains under his armpits.) To pad out the running time, “comical” scenes of Hansel trying to ride a horse and sneak into Gretel’s window are inserted, while the buxom maid spends her time watching the horses mate when she’s not getting pawed by the sleazy gardener (which isn’t often). Hansel also has drug-induced hallucinogenic nightmares involving torture and bloody S&M.