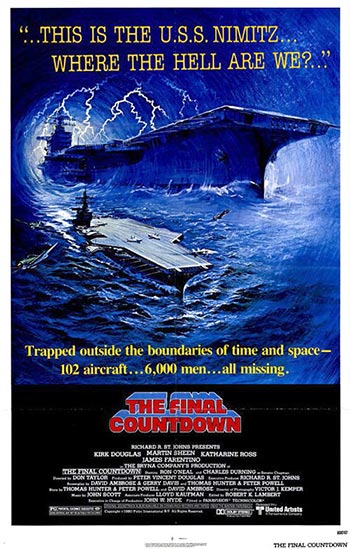 An American nuclear aircraft carrier and its crew are caught in a classic dilemma when a supernatural storm sends them back in time just before the Japanese assault on Pearl Harbor.

With a tantalizing “what-if?” scenario and a respectable cast of Hollywood veterans, The Final Countdown plays like a grand-scale episode of The Twilight Zone. It’s really no more than that, and time-travel movies have grown far more sophisticated since this popular 1980 release, but there’s still some life remaining in the movie’s basic premise: What if a modern-era Navy aircraft carrier–in this case the real-life nuclear-powered U.S.S. Nimitz–was caught in an anomalous storm and thrust 40 years backwards in time to the eve of Japan’s attack on Pearl Harbor? Will the ship’s commander (Kirk Douglas) interfere with history? Will the visiting systems analyst (Martin Sheen) convince him not to? Will a rescued senator from 1941 (Charles Durning) play an unexpected role in the future of American politics? Veteran TV director Don Taylor doesn’t do much with the ideas posed by this potentially intriguing plot; he seems more interested in satisfying aviation buffs with loving footage of F-14 “Jolly Roger” fighter jets, made possible by the Navy’s generous cooperation. That makes The Final Countdown a better Navy film than a full-fledged time-travel fantasy, but there’s a nice little twist at the end, and the plot holes are easy to ignore.