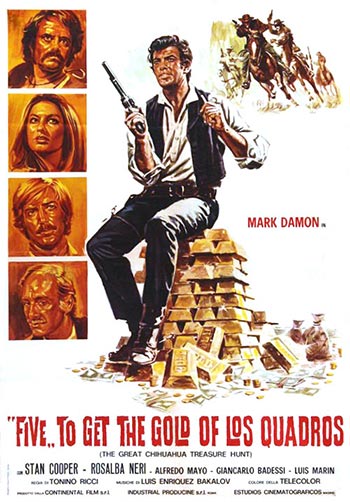 Lovable rogue Dean Madison (played by the charming Mark Damon, always good as a lovable rogue!) enlists a French munitions expert and his “niece” (played by the luscious Rosalba Neri–she and Damon would be reunited the next year in DEVIL’S WEDDING NIGHT) to help save his brother Sam, who has just been caught while robbing a bank. After that incident is resolved, about one-third of the way into the film, a blind man named Felipe is waiting for the quartet, and explains that he was kept prisoner and tortured by a mad Mexican general who has appointed himself as “El Supremo” and has built an impregnable fortress which is filled with gold. He suggests the quartet work with him to get that gold, so they head toward Mexico and thus begins the Great Treasure Hunt of the title.