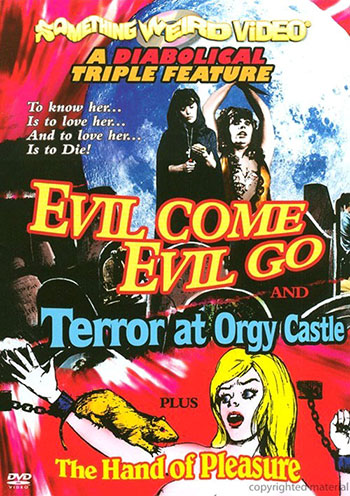 London, 1971: American CIA agents (with apparently no purpose being in the UK) are being abducted by gun-wielding gals of a gang known as The Hand of Pleasure (hence the title). Scotland Yard is baffled as they discover the bodies of men “sucked to death.” Who are these sexually insatiable ho’s? They are the result of the dastardly experiments of Dr. Dreadful, who recruits beautiful woman and turns them into “man-killing love robots” with his trusty iron maiden and sex transference machine! American student Joe is accidentally mistaken for an agent and is planted as a decoy by the Yard. But he and his gal pal Jill have no idea what insane sexual thrills await them in Dr. Dreadful’s Museum of Heinous Crimes!

From the grab-your-collar opening scene with a baby-faced agent being pounced by screeching naked ladies, HAND OF PLEASURE is one crazed mother of a movie! Part comedy, part sci-fi and part sex film, this is Spencer’s final shining moment in the sexploitation genre and is the closest he ever came to making a genuine movie with a plot. Contrary to the shots of London (which don’t look to be stock footage), this was definitely shot in California. There is no attempt at British accents, which might have added some great unintentional comedy, and Manuel S. Conde’s cinematography is once again kept simple to reflect the very low budget. Clocking in at 63 minutes, some of the travelogue London footage feels like padding (which is probably accurate), but the rest of the film is fast-paced and a hell of a lot of fun.