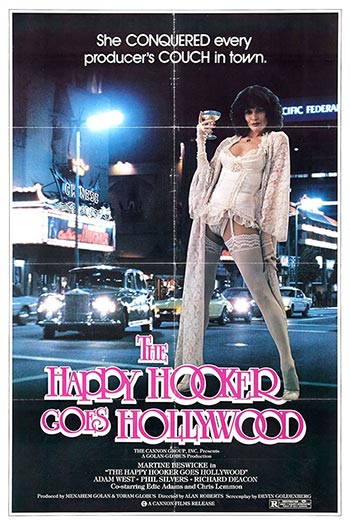 Loosely based on the life of Xaviera Hollander, a prostitute from the Netherlands, as she attempts to make a film in Hollywood based on her best-selling book about her life. She gets involved with some of the most crooked producers in Hollywood, but beats them at their own game and films the movie without them.

Director Alan Roberts, working from a blithely inane script by Devin Goldenberg, relates the cheerfully silly story at a constant snappy pace and maintains a playfully tongue-in-cheek tone throughout while delivering a bunch of amusingly lowbrow gags and oodles of tasty female nudity (even the insanely gorgeous Beswick shows off her sizzling hot stuff). Moreover, the game cast have a field day with the broad material: Adam West contributes an effectively slimy turn as dashing, but sleazy and duplicitous producer Lionel Lamely, Phil Silvers is a riot as cranky trash movie mogul William B. Warkoff, Richard Deacon has a ball as crude and boorish producer Joseph Rottman, Chris Lemmon gives a likable performance as nice guy eager beaver young executive Robby Rottman, and Edie Adams has a funny bit as clueless talk show host Rita Beater.

This picture further benefits from a bevy of beautiful ladies who include Lindsay Bloom as snippy starlet Laurie, Susan Kiger as the luscious Susie, Lisa London as the daffy Laurie, Tanya Boyd as the sultry Sylvie, and K.C. Winkler as the delectable Amber. Stephen M. Gray’s polished cinematography makes nice occasional use of dewy soft focus and artful dissolves. Tom Perry’s jaunty score likewise does the trick. Besides, it’s impossible to dislike a picture that features Dick Miller as a New York City cop customer who we get to see in the sack with Beswicke and the gust-busting sight of Adam West in drag. An amiably asinine hoot.