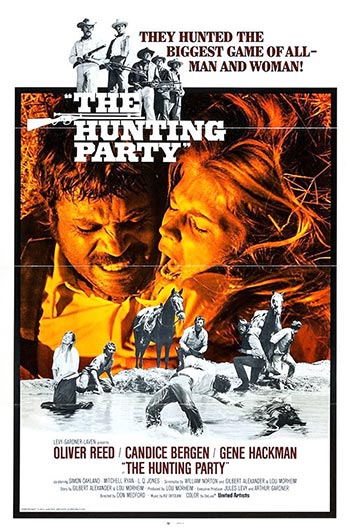 The rich and ruthless rancher Brandt Ruger keeps his beautiful young wife Melissa like a part of his property, subdued to his will. But one day she’s kidnapped by the famous outlaw Frank Calder – just to teach him reading, so he tells her. Calder doesn’t know or care who’s wife she is. He takes care of her well, and eventually Melissa falls in love with him. But Ruger feels humiliated. Full of hate, he sets out to kill him – and Melissa too, if necessary. Together with his friends and the newest technology in guns, which carry 800 yards, he initiates a battue on Calder and his gang.

THE HUNTING PARTY is a blood soaked western that is an obvious response to Sam Peckinpah’s THE WILD BUNCH. Made in 1971 by Don Medford and starring a young Candice Bergen, a vicious Gene Hackman, and Oliver Reed with an American accent. This is certainly one of the most violent westerns ever made with slo-mo gunshot wounds and more agony and gore than most horror films. Nihilistic and extreme without hope or redemption. The soundtrack is excellent as well as the photography and editing.