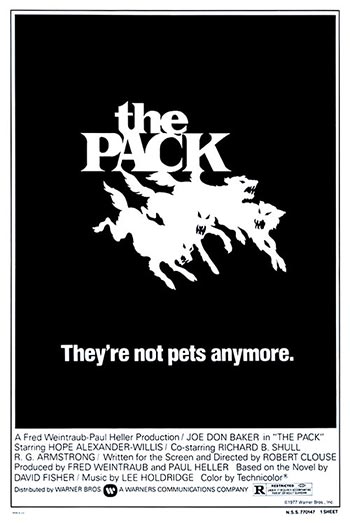 A horror movie about a pack of dogs who run amok on an island resort. Veteran action star (Joe Don Baker) plays the marine biologist forced to deal with the dilemma when the dogs begin to exhibit their killer instincts by hunting down and killing resort patrons.

What may at first appear to be a TV movie is actually an R-rated bloodfest, as the hungry canines tear into the folks and rack up an impressive body count. The movie has its share of scary moments, and is surprisingly exciting with carefully choreographed sequences of man versus beast. There is no hesitation on veteran action director Robert Clouse’s part to show the dogs being killed in equal measure. One great scene has the hero mowing down several of the pack with his truck. Great musical score to boot. Joe Don Baker stars, and several familiar faces, among them Richard Schull, Bibe Besch and R.G. Armstrong, provide strong support. A must-see for action horror fans. Considering the film was made in the 1970s, it feels like it was shot yesterday.