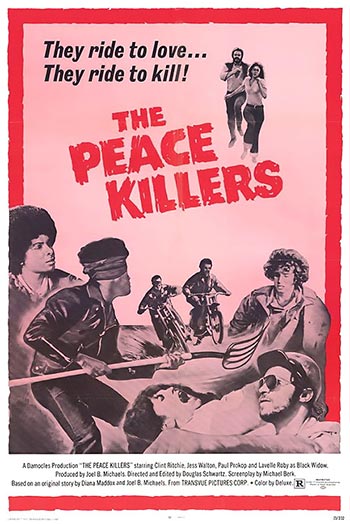 Siblings Kristy and Jeffrey are buying supplies at a remote desert gas station when some members of a biker gang come cruising in. The bikers recognize Kristy, who used to be the main squeeze of the gang’s leader before she ran away. The pair get away, but the bikers find out that they’re living in a nearby commune, and start making their battle plans to bring Kristy back.

What more could you ask for in a biker flick? The Peace Killers features hairy hippies, Jesus freaks, pot smoking pill popping baddies, gratuitous psychobabble, a fuzztone driven score…everything adds up to one of the best (and least known) entries in this entertaining genre.

Directed by future Baywatch creator Doug Schwartz, the film features an attractive lead in fresh-faced Jess Walton, who plays ex-motorcycle mama Kristy. She’s being pursued by her former paramour Rebel (Clint Ritchie, who looks like a gone to seed James Brolin), a biker with a HUGE stars and bars flag flying from the back of his hog.

This is a very violent film–the pencil skewering scene is unpleasant, and a rape sequence early on quite nasty–but a well made one, with good location photography by the director.

Add in some great folk-pop numbers from singer Ruthann Friedman and an unforgettable crucifixion scene, and you have a real winner! Side note: future Terrence Mallick cinematographer and husband of Sissy Spacek, Jack Fisk, was the gaffer on this film.