The Phantom of Liberty (1974) Luis Bunuel 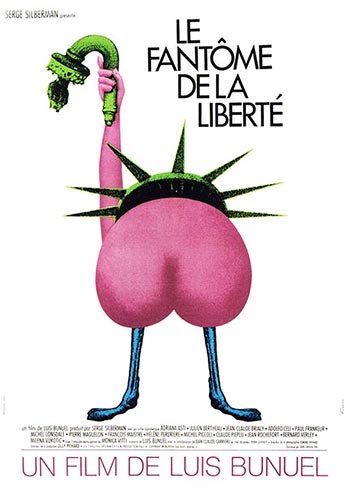 One of Luis Bunuel’s most free-form and purely Surrealist films, consisting of a series of only vaguely related episodes – most famously, the dinner party scene where people sit on lavatories round a dinner table on, occasionally retiring to a little room to eat.

The Phantom of Liberty is the Luis Buñuel film in which eating is presented as a private function, while going to the toilet is a social event. It is also the film wherein a peddler of “filthy French postcards” deals only in harmless scenic pictures. It is also the film in which an indiscriminate sniper is lauded as a hero. With all this going on, we should not be surprised that a little girl, who remains in full view of the audience throughout, is regarded as a missing child. Imagine the fun 20th Century-Fox had back in 1974 when trying to come up with an advertising “handle” for the doggedly indescribable Phantom of Liberty. They certainly could not exploit the aforementioned toilet scene, nor the sequence in which a group of monks use their religious medallions as poker chips.