The Price of Power (1969) Tonino Valerii 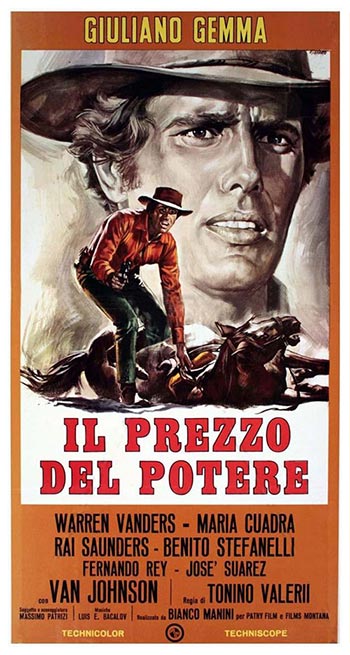 The Pinkerton detective agency uncovers a plot to assassinate President James Garfield in 1881 Texas. The film, a “political” Spaghetti, is a very overt mirroring of the JFK Assassination in 1963.

“The Price of Power” (1969), directed by Tonino Valerii, is a Spaghetti Western starring Guiliano Gemma, Van Johnson, Fernando Rey and Benito Stefanelli. Made six years after the assassination of US President John F. Kennedy, it seeks to comment sharply on the situation, perhaps more bitingly than Hollywood wanted or was able to do at that time.

The plot is thus, with their 1963 equivalents blatantly obvious: in Dallas, Texas, 1883 an unpopular liberal President (Johnson) visits the city and is assassinated in a crossfire of lead. A black patsy is quickly found by the corrupt sheriff (Stefanelli) and is killed while in transit between prisons. The framed man’s friend (Gemma) seeks to find out the truth, variously aided and set back by a mysterious government agent (Warren Vanders).

Reading the synopsis, it’s pretty clear where Valerii is heading, and he does so with style and tension. Well-acted, photographed and edited, with some excellent gunfights, this is a Spaghetti Western that deserves a much wider reputation that the one it currently holds.