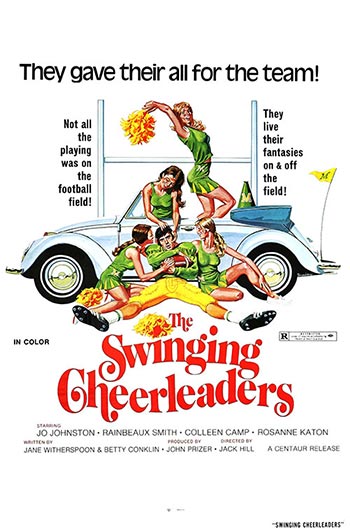 In order to write an expose on how cheerleading demeans women, a reporter for a college newspaper infiltrates the cheerleading squad.

The cast is great. Hill was good at finding attractive women to embody his screen characters, and the knockouts here include Colleen Camp and Cheryl (Rainbeaux) Smith. The plot is some silliness about a female reporter infiltrating the cheerleadering squad at Mesa University to get the scoop. Her boyfriend turns out to be a real jerk, and the eventual outcome is a confrontation with the snooty Camp and some pretty ridiculous bad guys.

The film copies some of Corman’s nurses movies (political conscious, making sure the token African-American character is there.)Yet, the film also seems to be parodying these more serious-minded New World pictures. SWINGING CHEERLEADERS is fun, and a reminder of what drive-in films were like (most exploitation films nowadays are not this fun).