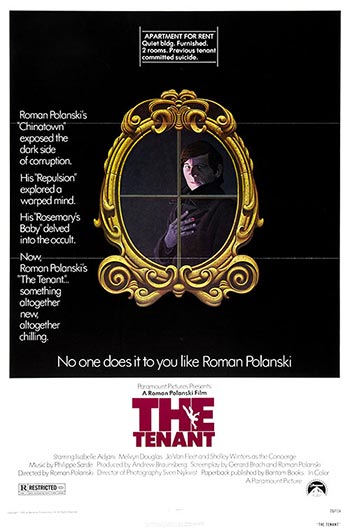 In Paris, the shy bureaucrat Trelkovsky rents an old apartment without bathroom where the previous tenant, the Egyptologist Simone Choule, committed suicide. The unfriendly concierge (Shelley Winters) and the tough landlord Mr. Zy establish stringent rules of behavior and Trekovsky feels ridden by his neighbors. Meanwhile he visits Simone in the hospital and befriends her girlfriend Stella. After the death of Simone, Trekovsky feels obsessed for her and believes his landlord and neighbors are plotting a scheme to force him to also commit suicide.

A Kafkaesque thriller of alienation and paranoia. Extremely well done and Polanski performs well as the diffident introvert trying hard to adapt to his dingy Paris lodgings and his fellow lodgers. Horrifying early on because of the seeming mean and self obsessed fellow tenants and horrifying later on as he develops his defences which will ultimately be his undoing.