The Town That Dreaded Sundown (1976) Charles B. Pierce 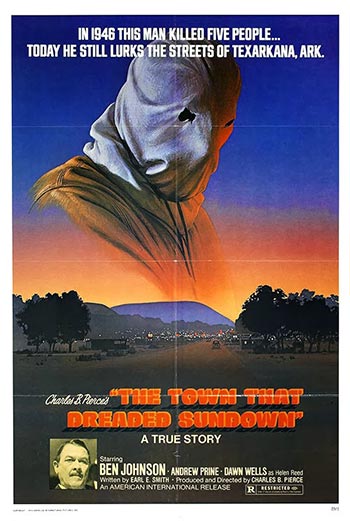 Set in the late 40’s the residents of Texarkana, Texas are left terrorized by a mysterious hooded killer who is stalking victims during the evening and leaving the local police at a loss.

Made a few years before the slasher films of the 1980s, this film was way before its time. The killer was brutal, sadistic, and very realistic. The murders were done in a very realistic manner, and with a cast of almost complete unknowns, it had a documentary feeling to it. Veteran character actor Ben Johnson was excellent as usual, and a nervous looking Andrew Perine did a creditable job, but it was the killer who stole the show. Excellent movie, tame by today’s standards, but a horror classic never-the-less.