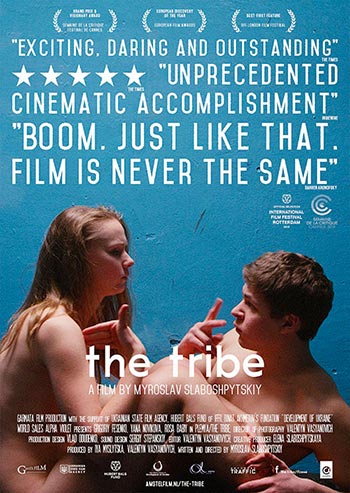 A deaf teenager enters a specialized boarding school where, to survive, he becomes part of a wild organization – the tribe. His love for one of the concubines will unwillingly lead him to break all the unwritten rules within the Tribe’s hierarchy.

Raw, brutal, without dialogue or sub-titles and a sensation at Cannes. Sergey is a newbie at a Ukrainian boarding school for the deaf and mute. Within hours of arriving at the school he is promptly and severely bullied by other students. He fights back and is rewarded by becoming part of the gang. He commits his fair share of robberies, pimping and vicious shake-downs without remorse or regret. This is until he becomes enamored with Anna, a fellow student by day and part of his pimping responsibilities at night. The substantial troubles and desperations of these young students is treated with shocking indifference, selfishness and disturbing disconnection by everyone involved. The lack of words puts the audience deeper into the emotions of the characters. The film adeptly and brilliantly provides the experience as if one is standing in their shoes.