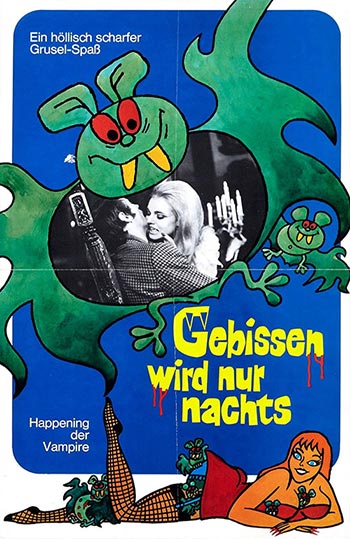 An American actress inherits a castle in Transylvania. What she doesn’t know is that her ancestor, the Baroness Catali, was in actuality a vampire countess, and emerges from her tomb to ravage the nearby village and Catholic seminary.

Combining uniquely German beer-hall humour, moody looking sets and an ‘international’ cast, director Francis has conjured an entertaining romp in which almost every female is topless and buxom, their male counterparts not as pretty but just as randy. Anyone who sees this movie will remember the party scene in which special guest Count Dracula himself (Ferdy Mayne) flies in by chopper to anoint the organisers and generally lend a certain prestige to the vampires’ bash. It’s an hilarious ode to the era of free love – here among the vampire fraternity – and is without doubt the film’s crowning glory. Watching the voracious vampires make a mad dash for their coffins before the sun rises is also a comic highlight.

Controversial Swedish actress Pia Degermark is alluring and does a reasonable job in a dual role of contrasting characters, while Hunter (one of the few English speaking actors in the picture) exercises some comedic talent as he romances both the lady and the vamp. Quirky, sexy and irreverent romp is obscure, worthy of cult status and should be viewed accordingly.