The White Gloves of the Devil (1973) László Szabó 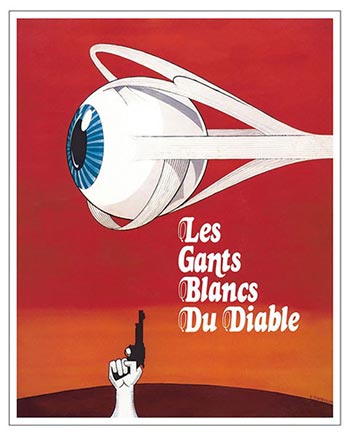 An enigmatic man, blind in one eye is the hit man in this French thriller. The films opens with this man, in dark glasses, walking into a bar and shooting a barkeeper. With the help of an unscrupulous doctor, the gunman has donated one of his eyes to a government official. As the film proceeds, he is shown receiving training in shooting at targets using sound alone. As the gunman continues his devastating activities, it appears clear that his actions are part of an elaborate conspiracy.

Semi-sleazy stylistic French thriller with a heavy ‘Manchurian Candidate’ sort of vibe, and an outstanding soundtrack. Quite enjoyable.