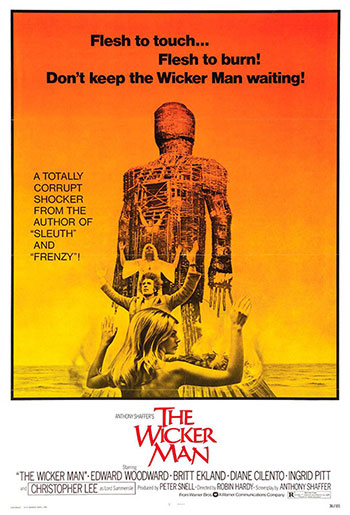 Sgt. Howie travels to Summerisle to investigate the disappearance of a young girl. He discovers that the locals are weird and unhelpful, and becomes determined to get to the bottom of the disappearance.

A quite unique and very creative mystery horror. Superb acting from Edward Woodward as the prim Seargant Howie, and Christopher Lee as Lord Summerisle. Fascinating from start to finish and a real twister of a plot that keeps you hooked right until the final twenty minutes, what appears at first sight to be an innocent search for a missing girl turns into a fascinating exploration of pagan rituals on a remote and sex obsessed Scottish island.

One of the best elements of the film is the classic early 70’s folk soundtrack which gives indication of how the era in which this was filmed influenced the subject matter.

Definitely not a ‘horror’ in the true sense of the word, but more mysterious and chilling than any gore-fest. A quality piece of cinema!