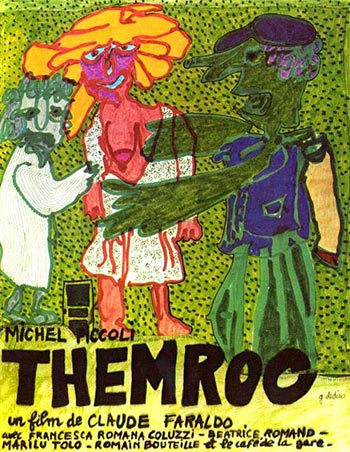 The urban caveman. One day, Themroc just blew up. He chucked his job, destroyed his flat, made it with his sister, dined on a cop and turned on the whole neighborhood.

This film is hilarious. It is inspiring. It captures the absurdity of everyday life in a repressive social order, and portrays the infectious poetic revolt of one man who “goes mad” against authority in every form.

It’s interesting that the strategy of liberation in the film revolves around a very personal and playful attack on the architecture most immediate to our lives. This destruction and transformation of space is accompanied by a kind of sexual revolution, disrupting bourgeois family dynamics in a contagious way. Readers may recognize the resonance of these themes with the theory and agitation of the Situationist International, the revolutionary / avant-garde organization credited with sparking the revolt of May 1968 in France. Five years previous to Themroc’s release, millions of people actually did occupy public spaces including universities and factories, creating “passionally superior ambiances” in many cases, armed to a significant extent with Situationist ideas, graffiti slogans from which plastered Paris.