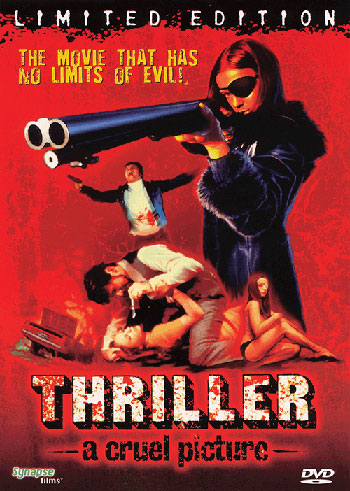 Rendered mute after a horrific assault in the park by a sadistic old paedophile, young Madeleine tries to escape the traumatic experience living in silence in her parents’ farmhouse. However, things will take a turn for the worse, when an innocent offer for a lift by a handsome stranger in a flashy sports-car leads to a nightmarish life of prostitution, abuse, and drug addiction. But when Madeleine finds out her evil pimp’s cruel scheme, an irrevocable course of sweet retribution and a deadly sawed-off double-barrelled shotgun will inevitably set the stage for a bloody roaring rampage of revenge. And then, no one will ever dare to harm her again. Never again.

“Thriller: A Cruel Picture” is a notorious Swedish exploitation film which has a strange, almost dreamy feeling. The killings are long and bloody. The use of extreme slow motion during death scenes is certainly impressive. Christina Lindberg is simply excellent as a mute girl who becomes a killing machine. The most controversial aspect about “Thriller: A Cruel Picture”, aside from the bloody violence, is the presence of several ugly hard-core sex scenes that show the girl’s prostitution work in graphic detail. So if you are a fan of grindhouse exploitation stuff give this film a look.