Trip Around My Cranium (1970) György Révész 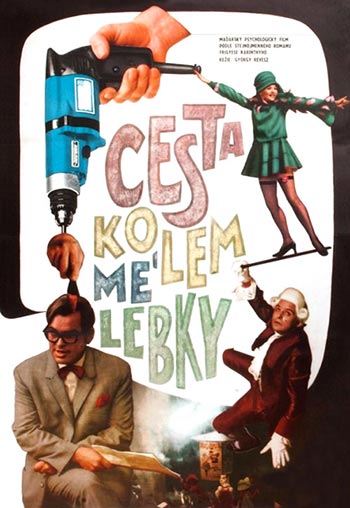 A thoroughly original, delightful comedy with serious undertones, this film is based upon the writings of a famous Hungarian journalist, Frigyes Karinthy.

Karinthy, who, in his later years, suddenly became afflicted with a brain tumor, wrote a humorous novel about his thoughts during his illness.

A Journey Around My Skull is not only a description of the illness and the great medical adventure of the writer, a strange, constantly unbalanced manner of life, but blends in several characteristics of Karinthy’s earlier works.

The writer (played by Latinovits, who won the Best Actor Award at the recent San Sebastian Film Festival for his role here) is placed in pre-war Budapest, during the 1930s, and, while seated in his favorite cafe one day, he hears the roaring of trains.

The recurrence of this sound is soon diagnosed as a brain tumor. He then travels to Stockholm for an operation and, while under local anaesthesia, the imaginative qualities of his mind, evocations of Karinthy’s flights of humorous fancy, take over the narrative. Everything is enlivened by rich, baroque escapades in which Karinthy’s personality breaks into several characters, including a sarcastic, bewigged aristocrat (called the Marquis), who comments upon the writer’s shortcomings.

There are Felliniesque circus scenes, a phantasmagoric set with music hall interludes, a toy airplane ride, amusing flashbacks to childhood, allusions to Mussolini and Hitler—all the grab-bag flourishes of an artistic reverie, an imagination fluctuating between ecstasies and the intimation of doom. The excitements in A Journey Around My Skull are worth experiencing—it is experimental cinema at its best, a clever amalgam of wit and philosophical sardonicism that keeps an artist’s brain flourishing.