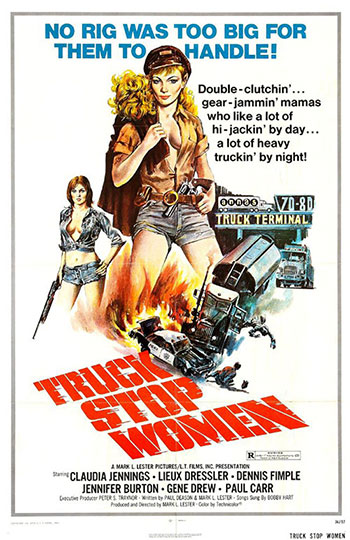 A mother and daughter who run a brothel for truckers fight back when the Mafia tries to take over their operation.

A great piece of early 70’s film: this gem has it all.

• The beautiful Claudia Jennings in go-go boots or naked throughout most of the film!

• The overt violence peppered throughout (from the opening execution in a bathtub, to the final battle featuring machine gun toting hookers and lots of tragic death)… all set to some great CB-era country music and a few bit that they had left over from “Land of the Lost”!

•The southern New Mexico locations that cradle our heroes in their struggle!

•The turncoat, Seago, getting trampled by 30 head of cattle in the back of a weaving truck!

Any way you slice it, this movie has it all. Sex, violence, bad acting, found locations, and a wacky plot that just keeps coming.