Varan the Unbelievable (1962) Jerry A. Baerwitz 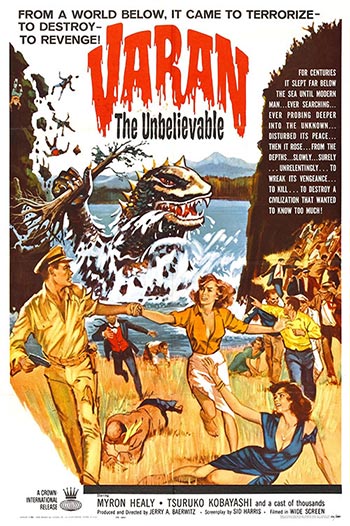 In an effort to find an economic means of purifying salt water, a joint U.S.-Japanese military command is set up on an isolated Japanese island where an unusual salt water lake is situated. However, their purifying experiments arouse the prehistoric monster Obaki from hibernation at the lake’s bottom, and it proceeds to attack Japan.

This movie was originally released in Japan in 1958 as Daikaijû Baran (“Giant Monster Varan”). The American version has a heavily altered plot, tons of additional footage featuring American actors, and most of Akira Ifukube’s music is replaced. All in all, Varan The Unbelievable features only about fifteen minutes of footage (mostly shots of the monster) from the original Japanese film.