Vengeance of the Zombies (1973) León Klimovsky 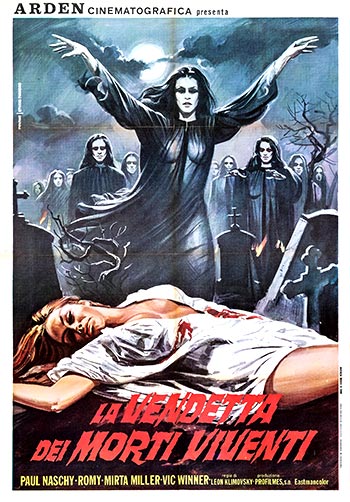 An Indian mystic uses magical chants to raise women from the dead, then sends them out to perform revenge killings for him.

This is a Spanish Horror though partially filmed in England. It contains suspense, necromancy, witchery, tension, beheading and lots of blood and guts with abundant sensationalistic scenes and a Naif style. The movie has a bit of ridiculous gore with loads of blood similar to tomato. B-entertainment with a fairly suspenseful and horrifying story in which a killer and walking Zombies undergo a criminal spree by means of slitting, decapitation and other brutal executions. This is the third time that appears Zombies in Spanish cinema, exception to Amando De Ossorio’s Templar living dead and ¨Horror rises from the tomb¨.

Surrealist images when Rommy dreams about a diabolic possession with characters painted in purple and a horned Naschy as devil. There appears Aurora Del Alba from ¨The Mark of Wolfman¨ as Zombie in slow-moving. As usual, Paul Naschy explains his knowledges with cheap erudition, as the voodoo and Zombie origin result to be the Antillas; a magician called Minister by means of some malicious spirits prepares a Black Mass and appears a kind of devil named Baron Samedi, then the wizard dropping blood on a wax-toy and sacrificing a hen, the sorcerer helped by a medium turns into immortal slitting a woman and drinking his blood.