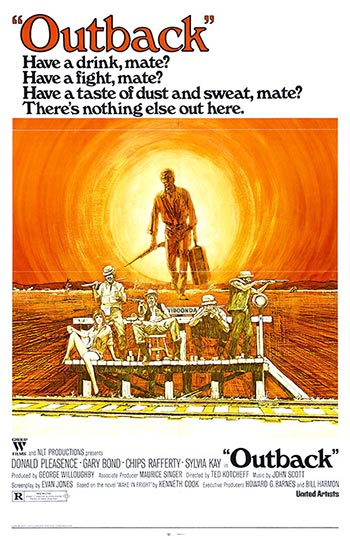 Wake in Fright is the story of John Grant, a bonded teacher who arrives in the rough outback mining town of Bundanyabba planning to stay overnight before catching the plane to Sydney. But his one night stretches to five and he plunges headlong toward his own destruction. When the alcohol-induced mist lifts, the educated John Grant is no more. Instead there is a self-loathing man in a desolate wasteland, dirty, red-eyed, sitting against a tree and looking at a rifle with one bullet left…

“Wake in Fright” resembles Sergio Leone’s cinema. The music and opening 360 degree shot of the small cluster of buildings in the middle of the barren and empty Australian desert echoes most famous Leone’s spaghetti westerns. Based on the novel by Kenneth Cook “Wake in Fright” shows the harsh reality of living in the outback. A young teacher John Grant is stuck in the town of Bundanyabba,the world of heavy alcoholism, kangaroo shooting, depravity, destruction and sexual perversion. The locals are repulsive and almost primitive. They drink tons of beer whilst being sweaty and half-naked. The footage from kangaroo hunt is unflinchingly haunting and disturbing. Stellar performances by Chips Rafferty, Donald Pleasence and Gary Bond plus some raw violence and destruction make this one a gritty classic of Australian cinema.