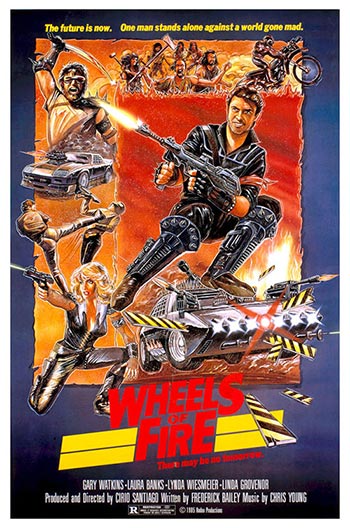 The Future is now. There are no rules and no place to hide from the deadly Highway Warriors who ravage the roads in machines of destruction.

Lynda Wiesmeier, July 1982 Playmate and cover girl has gone from girl next door knockout to an embarrassing, sadistic sleaze with this bomb of a film. Lynda has made what is considered the most humiliating, misogynistic film any Playmate has ever been in, which is the probably the very reason for its current popularity. This Road Warrior knockoff, that would be totally forgotten if not for our Playmate’s role in this slime-fest of a film, has Leather-clad Lynda being captured by a gang of the dirtiest, creepiest bikers you’ve ever set your eyes on. They take her back to their leader, a tough looking Mexican who’s equally dirty and creepy as his cohorts. Not surprisingly, he rapes her in front of his men. After he’s done banging her, he ties her – topless of course! – to the hood of his hotrod and drives his new trophy gal around in the desert so everyone can see how lucky he is, and to emphasize what a great hood ornament a Playboy Playmate can make for any car!