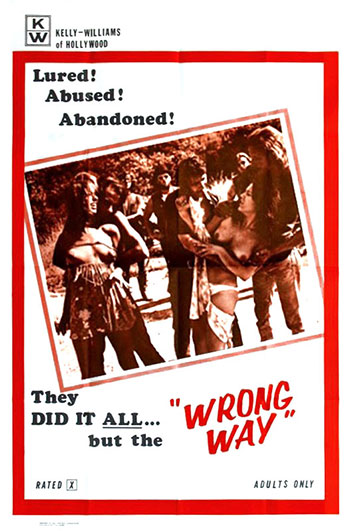 Two girls are driving home when their car breaks down in the country. They are kidnapped by a gang of drug-crazed hippies…

It is really astonishing when one thinks that, unlike today, there actually was a movie-making climate which allowed for films like Wrong Way to be made and put in real movie theaters. This is an astonishingly bad film but it is a fascinating example of early 70’s sleaze no doubt.

Two very pretty girls take the “wrong way” which is a short cut, their car breaks down, two hippies come along in their truck to give them a ride to help, but take them to their other hippie friends instead. They rape the girls repeatedly in the middle of nowhere until finally letting them go, where the girls then meet other crazies who rape them too. Stick in a very mild police investigation and, for the hell of it out of nowhere, toss in some drug runners who have sex with another pretty girl and there’s the movie.

The group of hippies that rape the girls first are an amazingly sleazy bunch. Beer bellies, greasy hair, all unattractive, a total nightmare for any woman. They also are real “backwoods” and that’s scary in itself. For instance, one (named “Crabs” I think) keeps scratching his groin, then complains to another that he got that itch after he let the other guy “suck” him. Ouch! The “acting” (especially by the two girls, who give it their best) is hilarious, but the rape scenes are truly wonders to behold. When the hippies rape the girls, you see much more of the men’s ugly bodies than the girls. One guy’s butt is even green! The rape lasts a very long time, with cheesy folk guitar music playing in the background. Before the rape, we even see another group of hippies hanging around who are against raping the girls, but a shotgun held by the leader chases them away.

Then later on for seemingly no reason, two ugly drug runners have sex with a very pretty drugged out girl, in another overlong scene. It all ends soon after in a quick “resolution” to the “plot.”