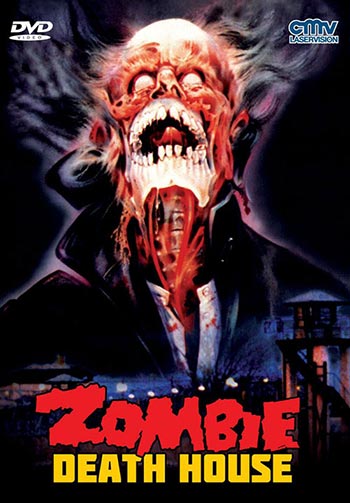 Actor John Saxon graduated to the rank of director with this grisly splatter-gore, exploitation mash-up “Zombie Death House” about a virus that turns death row inmates into ravenous, flesh-eating fiends. Dennis Cole stars as decorated Vietnam veteran Derek Keillor, a driver for murderous mafioso Vic Moretti (Anthony Franciosa of “Across 110th Street”), who has him framed for the murder of his girlfriend and sent to Death Row. Actually, the jealous Moretti drowned his girlfriend Genelle Davis (Dana Lis) in his own bathtub because she was having an affair with Derek. Anyway, after Derek is shipped up the river to Townsend State Prison, he finds himself in real trouble when Colonel Burgess (John Saxon) gives the prison medical team the green light to administer a genetically altered version of a virus called HV8B. Saxon knows a little about horror movies since he starred in the cannibal classic “Cannibal Apocalypse,” the seminal 1974 slasher flick “Black Christmas and Dario Argento’s “Tenebre.” This is good, ghoulish, gory fun.