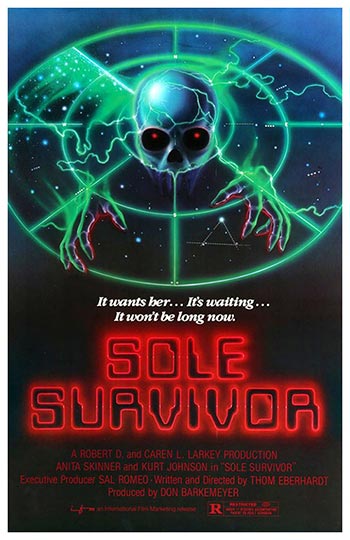 Denise Watson is a TV station worker who is the only survivor of a unexplained, horrific airplane crash in which she is completely unscratched. Soon, Denise becomes haunted by feelings of unworthiness as well as seeing strange people following her and hearing voices calling her name which no one but she can hear. Disregarding warnings from a psychic actress friend, Denise tries to get on with her life while it’s revealed that she was supposed to die in the crash, but somehow escaped, now the unseen specter of death wants to collect her by sending its minions, people that have recently died, to kill Denise and finish the job what death had planed for.

Writer / director / editor Thom Eberhardts’ feature directing debut is a nicely realized, grim and spooky little shocker worth viewing for horror aficionados hoping to find good lesser known films from decades past. It’s got plenty of atmosphere, a never ending feeling of uneasiness, a good spin on “living dead” cinema, and its themes and ideas are interesting. As genre junkies will realize, it’s similar in some ways to the more famous “Final Destination”, which came along 17 years *later*. Eberhardts’ script is often witty and offers good roles to a capable cast.