Give Us Tomorrow (1978) Donovan Winter 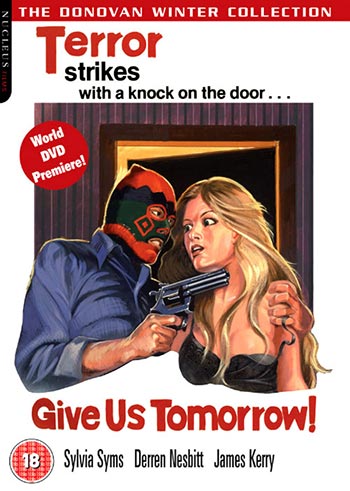 With a cast of experienced British acting talent headed by Sylvia Syms and Derren Nesbitt, this grimy yet sleek hostage movie is far more than your standard slice of Soho sleaze; and, like The Deadly Females, emphasises the director`s gradual move from the tawdry British Sex Film towards social comment- with a hefty chunk of suspense thrown in.

Shot in leafy suburban Orpington, the story concerns two less-than-professional criminals, Ron (Derren Nesbitt) and The Boy (Alan Guy) who imprison a family in their home whilst their accomplices raid a local bank managed by the father (James Kerry) But then something goes wrong, and a bank teller (Gene Foad) is shot dead, and the hapless duo soon find themselves without the loot in a lose-lose situation with half the London Borough Of Bromley constabulary in attendance. Tense and claustrophobic but with a setting straight out of a Thames TV sitcom.

GIVE US TOMORROW was at the time originally withheld for legal reasons from proper distribution or theatrical release.