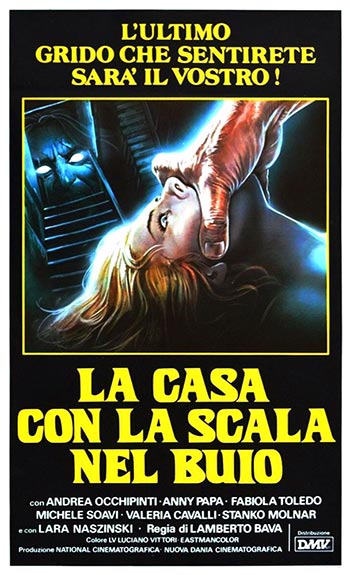 A composer, working in isolation on a score for a horror movie meets two women who used to know his house’s former tenant. When the women disappear, he’s forced to look into the film he’s working on to determine what happened to them, and who’s responsible.

Produced at the height of his career, “A Blade in the Dark” marks Lamberto Bava’s best directorial effort, a slick, intriguing, and sometimes shocking giallo. Bruno (Andrea Occhipinti, of “The New York Ripper”) rents an isolated villa to work on the soundtrack for a horror film, only to find himself in the middle of a murder mystery, as young girls meet grisly ends at the hands of an unseen killer.

While clearly influenced by the works of Dario Argento, Bava opts for a bland, impersonal color palette that intensifies the mood, combined with a script that has fewer contrivances and red herrings than a typical offering from the aforementioned maestro. The result is a satisfying giallo whose only crime is an occasionally sluggish pace…but stick with it, for ghastly surprises are in store for those who wait.