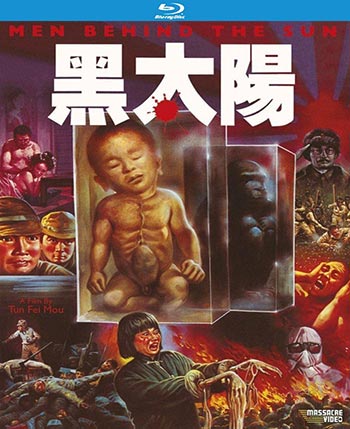 Story of a Japanese terror camp in the end of WW2, where the Japanese are using the Chinese as guinea pigs in terrible experiments to develop deadly bacterial-plagues.

Pretty much everything they say about this movie is true… It’s sick, unnameable cruel and shocking, but also unforgettable and quite impressive. “Men Behind the Sun” is not just another wannabe-controversial Asian horror movie, but a devastatingly graphic and accurate history lesson that mostly became controversial due to a handful of notorious scenes.

The events take place during the final months of WWII in a Japanese prisoners’ camp. The Japanese, allied with the Germans, are slowly but surely losing the War and one General and a couple scientists believe it’s up to them to turn the tide by experimenting with bacterial weapons and recruiting young boys to fight for their country. In the middle of their heavy training schedule, these boys are forced to witness some of the most inhumanly sadistic and repulsive experiments ever. The victims are ordinary Chinese and Russian citizens – men as well as women and newborn children – that were captured during battle & held prisoner in lamentable conditions.

“Men Behind the Sun” remains one of the absolute greatest Asian shock-productions ever! The acting performances are really convincing, T.F.Mous’ directing is solid & professional and the locations and scenery appear to be genuine. The emotions you experience whilst watching this movie are almost indescribable. How are you supposed to behave when observing the detailed autopsy of a defenseless little child? Not even to mention the utterly gruesome experiment in the decompression chamber? Does this make you a sick voyeur yourself or is it actually necessary to see this in order to acknowledge the factual horrors of war and reassure yourself that this may never happen again? Any movie able to provoke these kind of thoughts in your head is a milestone of cinema and nothing short of a masterpiece.