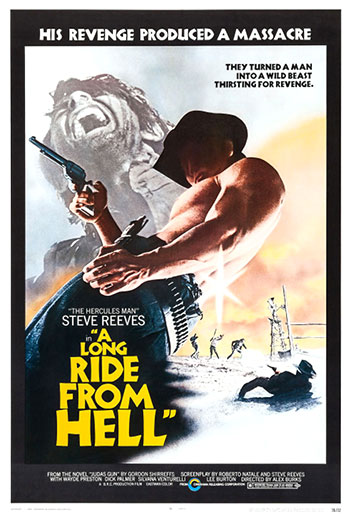 Mike Sturges and his younger brother, Roy, are sentenced to Yuma Penitentiary on a trumped-up train robbery charge. Both endure cruel treatment before Mike escapes to extract revenge on their enemies.

Steve Reeves only made one spaghetti western, but it’s a good one. VIVO PER LA TUA MORTE was made in 1968, a golden year for the Italian Western, and many of the genre’s favorite sons appear in this tale of revenge and redemption, among them Aldo Sambrell, Nello Pazzafini, Spartaco Conversi, and Silvana Bacci. Reeves makes a good western hero, losing his shirt at times to give us a glimpse of his splendid physique; at age 42 he was still in great shape and spends lots of his screen time running, jumping, engaging in fist fights and carrying on like a much younger man. The film’s depiction of Yuma Territorial Prison is good also, replicating the feel of the prison remarkably well. A very minor knock is that the pistols are of the John Woo variety, shooting fifteen or sixteen times as needed, particularly noticeable in the prison break. The music by Carlo Savina is outstanding, but that’s as usual for this genre.