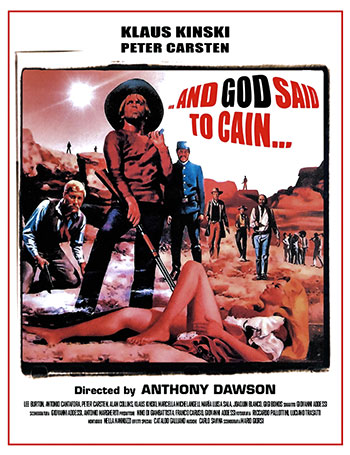 An innocent man sentenced to ten years in prison for a crime he did not commit, is released from jail, promising to seek revenge on the guilty.

After 10 years in prison, Hamilton (Klaus Kinski) swears revenge to those who betrayed him. The Showdown actually begins after only 30 minutes. After the introduction of the characters, the whole film plays during the stormy night of revenge. The most remarkable thing about this film is Margheriti’s unusual visual interpretation. It lets this Western look like a horror film, with typical small effects like windows suddenly opening, curtains blowing, or birds screaming when the name Hamilton is called. Kinski’s appearances have got a kind of supernatural touch, he seems to appear or disappear like a ghost. Nevertheless a natural explanation (darkness, caves, a sandstorm) is always provided. The darkest Western ever made takes place at night for two thirds of its running time. And as a stark contrast, it ends in a bright mirror room. Kinski usually played one of the bounty hunters in his spaghetti westerns. In this case, he was cast as the hero (well, anti-hero) which turned out to be a clever move. Extraordinary for the genre!