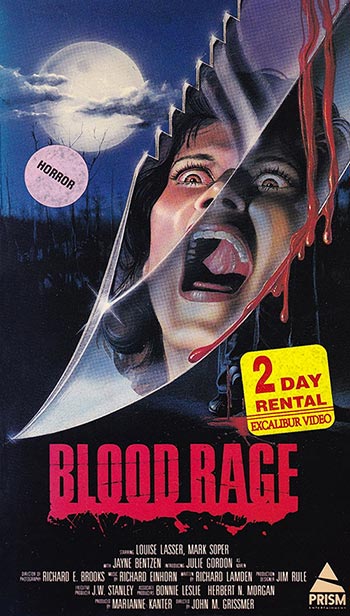 At the drive-in, young twins Terry and Todd see their mother Maddy (Louise Lasser) copping off with her boyfriend in the front seat of the car, which sends Terry into a murderous rage, the boy attacking another courting couple with an axe. Terry manages to blame Todd for the killing, the innocent lad getting locked up in a mental institute while his brother gets away with murder (literally!). Ten years later, Todd (now played by Mark Soper) escapes from the institute just as Terry (also played by Soper) begins to kill again, spurred on by his mother’s announcement of marriage and his randy friends’ carnal activities.

A rather obscure slasher from the late ’80s, Blood Rage isn’t all that innovative, with yet another killer who targets those having sex, but where this film succeeds is with its numerous grisly death scenes and gratuitous nudity: the gore is plentiful and suitably nasty, with a lopped off hand, a severed head, a bisected body, and assorted bloody slashings and impalements, and there is quite a lot of nekkidness on display, including the obligatory shower scene and a couple having sex on a diving board.