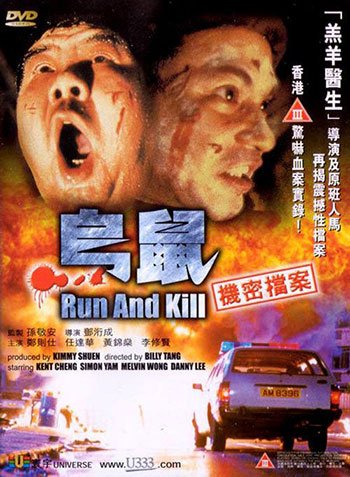 To absolve a debt to a gang for accidentally putting a hit on his wife, a man goes and kills the gang’s leader, leaving the leader’s brother to seek violent retribution.

Believe it or not, this film was intended as a dark comedy. And comedies don’t get much darker than this. Hong Kong’s master of depravity, Billy Tang, has made an exploitation film so far over the top that it’s funny. The plot is fairly complex, actually, and ingenious in how it arrives at where it does. Fatty (Kent Cheng), tired of his cheating wife, mistakenly hires a triad to kill her. Upon her demise, he is presented with the bill, which he cannot pay. He seeks refuge with a band of former Vietcong mercenaries. When the one who has taken him in is killed by the triads, the dead man’s crazed cousin (Simon Yam) seeks revenge on not only the triads but Fatty as well, whom he blames for his cousin’s death.

Run and Kill is extremely excessive in places, but then this is what makes Cat III films so compelling. Seeing exactly how far the makers will go in the name of entertainment is all part of the fun. A must for fans of twisted cinema.