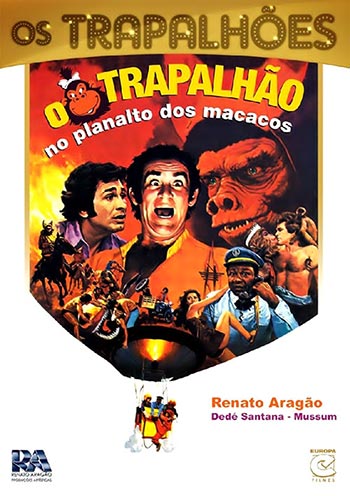 This movie is a spoof of “Planet of the Apes” (1968) and follows the storyline of the original step by step – in spite of being a crazy parody of the original film. A group of men lands in a balloon on an area (it’s not a planet, it’s more like a hill) where talking apes rule and humans are slaves. The apes try to transform the guys in monkeys; a simian princess falls in love with one of them; and so one. This film is one of the several movies made for the popular Brazilian group “Os Trapalhões” – Didi (Renato Aragão), Dedé, Mussum and Zacharias – in the seventies, all of then inspired in American blockbusters. It’s a very fun entertainment, but the humor is very “local” to be understood in other countries. Oh, yeah, the ape “makeup” is terrible, but that’s part of the fun. The movie don’t take itself seriously.