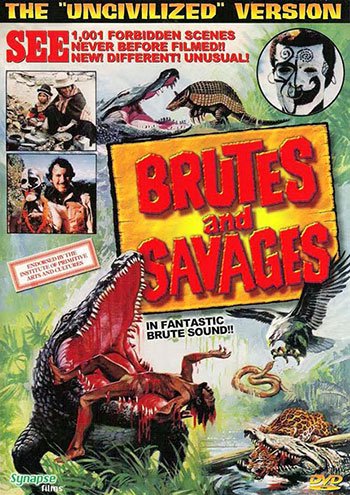 Fascinated by forbidden rituals and ceremonies, world explorer Arthur Davis takes a crew with hidden cameras to Africa and South America to secretly record the beauty and horror of the “law of the jungle”. Brutes and Savages is the filmed document of his death-defying adventures. Shocking, brutal and repulsive, this film mixes bizarre authentic footage with incredibly exploitive (and often hilarious) “reenactments” of his findings. Animal sacrifices, bizarre tribal ceremonies, mating rituals and even brain surgery … it’s all here!

When first released in US theaters in 1978, Brutes and Savages was cut down to avoid problems with the censors. This digitally re- mastered DVD release contains almost 15 minutes of additional shocking footage not shown in theaters and has an amazing music score composed and conducted by Euro- Horror music maestro, Riz Ortolani.A graphic and disturbing film exploring the unknown world of primitive cultures, Brutes and Savages is DEFINITELY not for the weak or faint of heart.