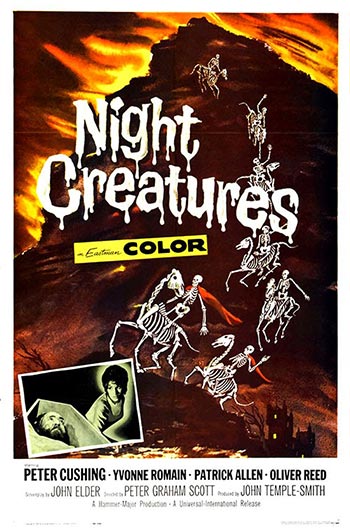 In this engaging costume melodrama of skulduggery on the low seas set back in the 18th-century, the Royal Crown suspects a bit of smuggling is going on in this locale, and they send Captain Collier and his crew to check it out. As the Captain gets into his investigation, mysterious swamp phantoms cloud up the real issue which seems plain enough to see. Captain Collier suspects that the odd village vicar might be hiding something, and what better way to do that than by fortuitous ghosts to scare away the curious, or by posing as someone he is not?

Peter Cushing is on fine form as is the ever-reliable Patrick Allen and Oliver Reed gives a nice performance as an innocent young man (as if!) The irreplaceable Michael Ripper gets a bigger role here than in most of his films and shines too with a nice line in sarcasm. The story is fun and the location filming is very pleasant but the thing that lifts this movie to classic status is the electrifying scenes of the Marsh Phantoms, a brilliant realisation of real fear. Remarkably considering that the viewer is aware from the start that they are villagers dressed up, their appearance is incredibly convincing! The opening sequence of scrolling scene setting and narration with a faint glimpse of a skeletal figure on horseback weaving through the background is only a hint of the awesome scenes that follow. After that the film settles down to good historical adventure, lively and funny and only occasionally marred by slapstick, as in the fight in the church.