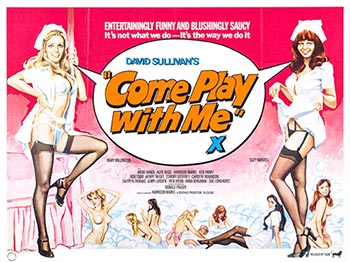 A health-resort where both the clients and the employees easily take their clothes off and have a litte fun is the setting of this hugely popular sex-comedy.

Two counterfeiters (Alfie Bass and George Harrison Marks, who also directed)go on the lam from the law and hide out at a Scottish health spa run by a septuagenarian (Irene Handl). Then a bunch of strippers also start working at the spa for some reason. This movie – which amazingly was a box office smash in the UK in the late 70s and early 80s (it ran non-stop between 1977 and 1981 in London’s West End) – embodies everything that was bad about British so-called `sex films’ of the era – namely a lame and tedious plot and poor acting. But it also has the virtue of being an extremely odd movie, a relic of a past age which not only offers some valuable social history but which also preserves on celluloid a long-dead era of British vaudeville and girlie shows.