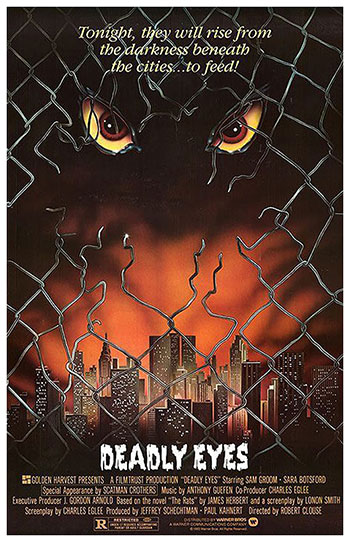 Corn grain contaminated with steroids produces large rats the size of small dogs who begin feeding on the residents of Toronto. Paul, a college basketball coach, teams up with Kelly, a local health inspector, to uncover the source of the mysterious rat attacks and they eventually try to prevent the opening of a new subway line as well as find the mutant rats nest quickly, or there will be a huge massacre of the entire city!

Director Robert Clouse lets the enjoyable story unfold at a snappy pace, delivers a handy helping of grisly gore, and stages the rat attack set pieces at a bowling alley and in a movie theater showing Clouse’s Bruce Lee opus “The Game of Death” with gusto. Moreover, the filmmakers warrant extra props for their take-no-prisoners attitude towards the premise: The vile vermin munch on a baby and several old folks.

The fact that the rodents are played by Dachshunds in pretty obvious and unconvincing costumes gives this honey a considerable amount of infectiously kitschy charm. Charles Eglee’s endearingly hokey script not only includes a familiar subplot about a smarmy mayor who just cares about the opening of a new subway line (guess what happens here), but also tosses in a sappy romance between Groom and Botsford for good corny measure (cue an excuse for a love scene in front of a raging fireplace with Botsford bearing her breasts).

This movie further benefits from the pulchritudinous presences of Canadian scream queens Lisa Langlois as flirtatious cheerleader Trudy White and Lesleh Donaldson as Trudy’s sassy gal pal Martha. Scatman Crothers contributes a lively and amusing turn as a crusty sanitation worker who curses out the rats prior to meeting a gruesome untimely end. Bot Rene Verzier’s slick cinematography and Anthony Guefen’s spirited shivery score are up to speed. A total campy hoot.