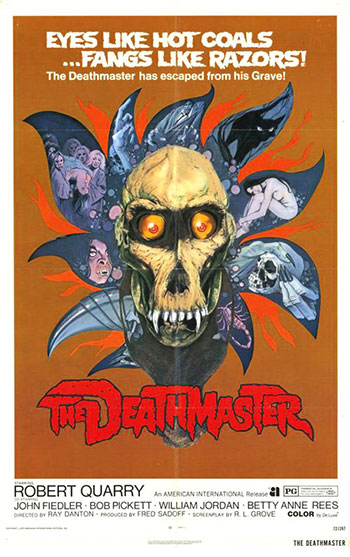 Quarry is a mysterious stranger with cult like following of hippies. Rather than showing them peace and love, he has more sinister plans for them as he is a vampire.

Great early 70’s clothing, a philosophizing folk song (wow, man, it’s like, so deep), unspoken drug references, and the undead! What more could you possibly ask for? Deathmaster really is Quarry’s movie. His Mansonesque portrayal of Khorda infiltrating and taking over a commune of lost hippies is eerie. The movie’s effectiveness really lies in the context that people can be so easily controlled and fall victim to cults, rather than the fact that Khorda possesses their minds because he is a vampire. That Quarry is made up to resemble Charles Manson is a not-so-subtle hint to the movie’s theme.