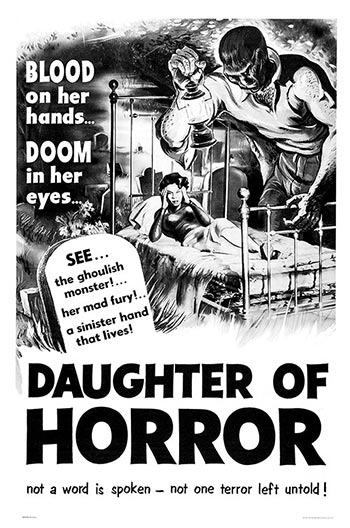 Its a strange pantomimed tale of violence, murder, revenge, dismembering, and prostitution. The original film Dementia, has no dialog at all. The later released Daughter of Horror has a scary voice over by Ed McMahon.

The Gamin (Adrienne Barrett) wakes in a cheap hotel room, pulls out a switch blade and fades in and out of reality. We follow her through the skid-row night and encounters beginning with an abusive husband hauled away by the police. She then gets bothered by a wino and pimped to a Rich Man (Bruno Ve Sota) as she is followed by the Law Enforcer (Ben Roseman) that has the face of her father. Filmed in film-noir style throughout, you would swear it was foreign, but it was made in Hollywood. Download this one if you want to see what all the censor problems were about.

In the US, Dementia premiered in New York City in 1955 with four cuts demanded by the censors. This version was picked up by Jack H. Harris and released as Daughter of Horror. Harris’ version also has music without dialogue, but with an added narration read by actor Ed McMahon.

Definitely see the dialog-free version (DEMENTIA) before you see the narrated version (DAUGHTER OF HORROR) but do see both of them because the narration by future Tonight Show co-host Ed McMahon is priceless! The jazzy score and accompanying vocal renderings accent the weird mood perfectly. The last 15 minutes in the jazz club are especially striking as music, image and pace increase to a fever pitch until the movie starts as it began. It’s amazing that a film as avant garde as this actually played mainstream theaters in the 50s.