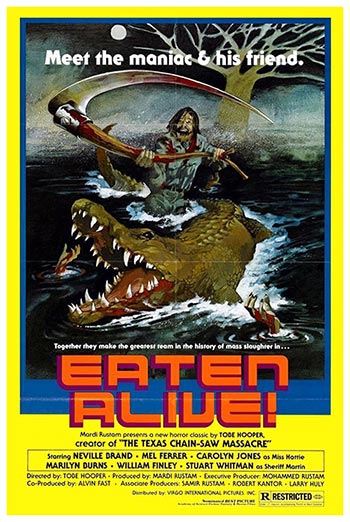 Judd runs the Starlight Hotel out in some sort of swampy place and is unfortunately a few slices short of a loaf. He has a crocodile conveniently placed on the other side of the hotel’s front porch railing. The croc will eat just about anything, as the hapless guests of the hotel find out soon enough. A reformed hooker, an unlucky family, and the father and sister of the hooker all suffer various rates of attrition as Judd tries to implement damage control.

Delirious, surreal, and savage, Tobe Hooper’s follow-up to his landmark debut (“Chainsaw” for those not in the know), is one of a kind while bearing the same signature stamp he left with his predecessor. A sheer unrelenting onslaught of pure madness, macabre and dark humor. Although not as entirely successful as Chainsaw, “Eaten Alive” is one messed up little drive in flick with good performances particularly by Brand as the psycho Inn keeper of “Starlight Hotel”. Mumbling incoherently through most of his screen time and sputtering gibberish when audible, Neville Brand is eerily convincing. The beginning of this picture owes to Psycho in that you meet a character that you are led to believe is the (no pun intended) titular heroine but is quickly dispatched and we are left with the equally sleazy and\or oddball residents of the locale like ole’ country boy Buck (Englund, who’s a hoot) or that oddball couple who’s dog gets chomped by the gator that lives in the swamp behind the hotel. It’s that kind of movie folks so be aware what you’re getting into. Creepy, oddball fun.