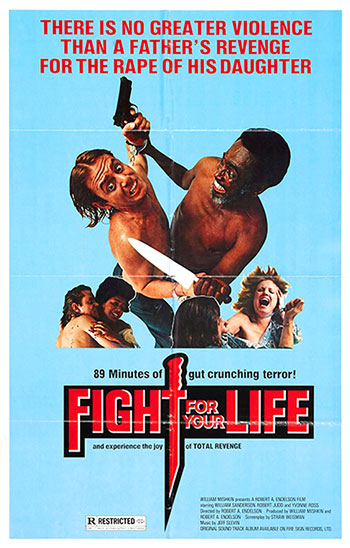 Audio 2: Commentary with with Writer Straw Weisman
and Director of Photography Lloyd Freidus

FIGHT FOR YOUR LIFE may well be one of the most politically incorrect movies ever made, but it’s also one of the most gripping and entertaining examples of the zero-budget grindhouse genre since the blaxploitation flicks of Jack Hill and early Wes Craven (whose THE HILLS HAVE EYES came out the same year).

A trio of thoroughly unlikeable convicts under the loose command of a convicted rapist and murderer (William Sanderson in an amazing no-holds-barred performance) escape from a prison escort van following a traffic accident and hole up in the remote home of a God-fearing black family. Unfortunately Sanderson isn’t exactly the tolerant type and subjects the family to all manner of abuse, mainly verbal (some of Sanderson’s lines are SO outrageous they’re actually perversely amusing) as it happens, but when he gets physical things get extremely disturbing. Even for an exploitation flick, it’s still more than a little shocking to see a child getting his head bashed in with a rock, a topless woman thrown off a cliff into a fast-flowing river, a toddler taunted with a pistol, inter-racial rape (largely off-camera, thankfully), and the inventive violent mayhem of the last twenty minutes or so still packs a punch today.

FIGHT FOR YOUR LIFE isn’t for everyone – Straw Weisman’s screenplay contains just about every racial slur known to mankind – but it’s well shot, well edited, unsettlingly well acted and there’s precious little padding so no danger of getting impatient for things to start boiling over again. It may be a time capsule but it’s a very potent one, and it’s sobering to realise that people like Kane’s character are still out there, and not just mouldering in prison cells either.